The shutterbugs were here since early morning, to claim a good vantage point from which to view the proceedings of an evening event when hundreds of floating lanterns were to be released into the night sky at the same time. It was raining heavily and they have probably waited for hours by now, but nobody would give up their spot.

Street photography is opened for interpretation based on the viewer’s own thoughts, feelings, and experiences. Why is she keeping her distance?

Bodiless and watchful eyes. I thought this hotel entrance is a bit too creepy for comfort. Apparently, they think otherwise. The statues are supposed to represent their efforts to offer the best hospitality services to people from all around the world. Asians, Africans, Arabs and Westerners.

When you board a train in Japan, you might notice rail workers in crisp uniforms constantly pointing at things and calling out.

Likewise, for the platform attendant whose duty is to ensure the tracks are free of debris or fallen passengers, he would point down the track and sweep his arm along the length of the platform, with his eyes following the hand movement, before declaring all clear. Apparently, a visual scan alone is not enough.

Such movements and shouts are practised by Japanese railway companies. The procedure is known as “Shisa Kanko” and translated to mean “Pointing and Calling”. It combines looking at something, pointing at it, calling out the observation, and listening to your own voice. The act of pointing promotes focus and attention, while the act of calling out the action reinforces correct procedure. It helps to avoid sloppiness and complacency. This method has been credited with reducing workplace errors and accident rates.

I am impressed with their attention to details and awareness of safety. It also requires a lot of self-discipline to carry out such physical gestures and vocal calls even when not under supervision. Most of the time, there is no one to hear or observe his action! In fact, you often see train conductors seemingly talking to themselves while alone in the driver’s compartment. 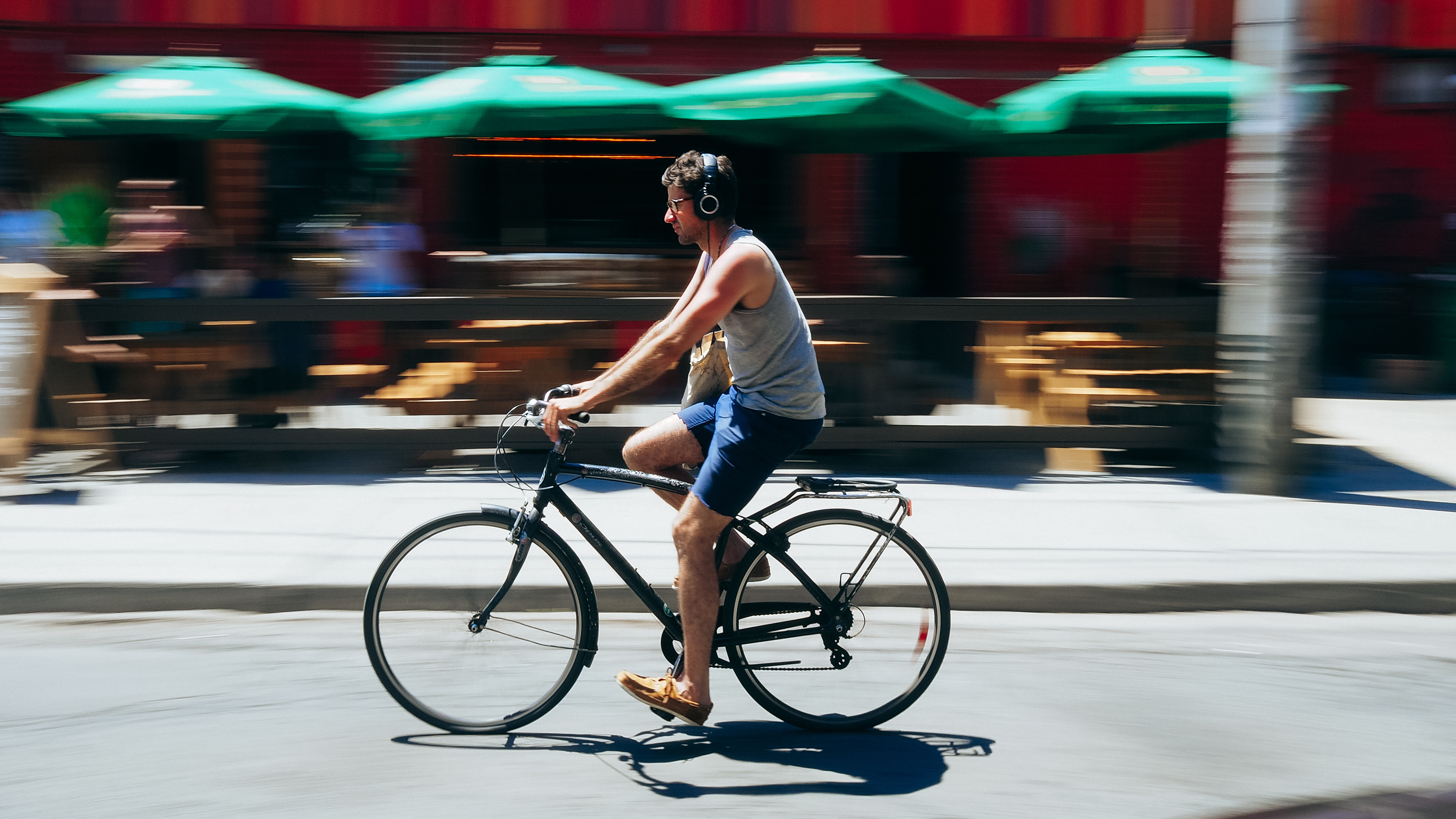 This is a very ordinary picture. In fact, it is not even a good example of street photography because despite capturing a moment on the street, it doesn’t really tell a story.

However, this shot has given me great satisfaction at a personal level. For a few years, I had numerous failed attempts with “panning”, which is a technique of sweeping the camera along in time with the moving subject and to get a relatively sharp subject but a blurred background with horizontal streaks. It freezes a moment and yet gives a feeling of movement and speed. I never nail it until this one.

By the way, panning comes from the word panorama. 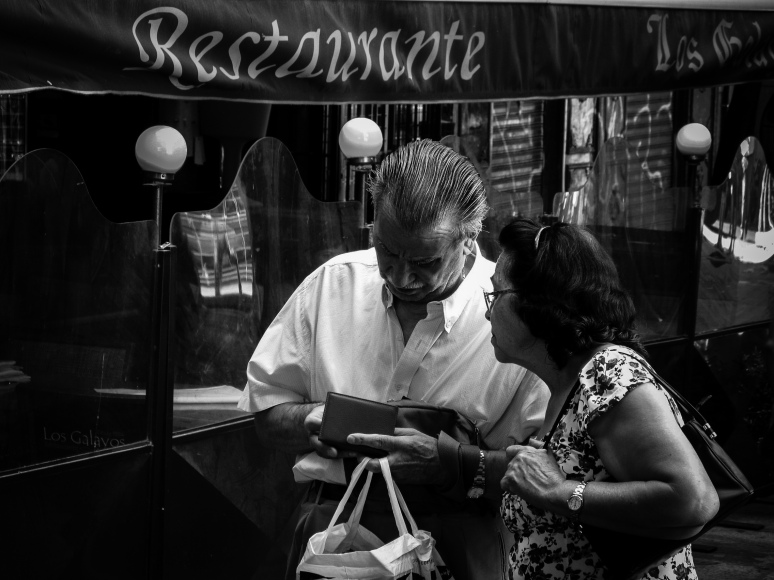 Candid shot of a sweet couple outside a restaurant. Seems like his treat, but he got to check his wallet first.

My response to Weekly Photo Challenge: Treat. Pardon me for not going with the Halloween theme or the self-indulgence theme … I don’t have those photos in my archives 🙂

Wet day, dull sky, boring buildings and two bridges with clashing colors that nearly hurt my eyes. Everything was so unappealing to me. But when this cyclist came along, he was like the last piece of the puzzle that pulled all the other ordinary things together. Somehow, it became just right 🙂 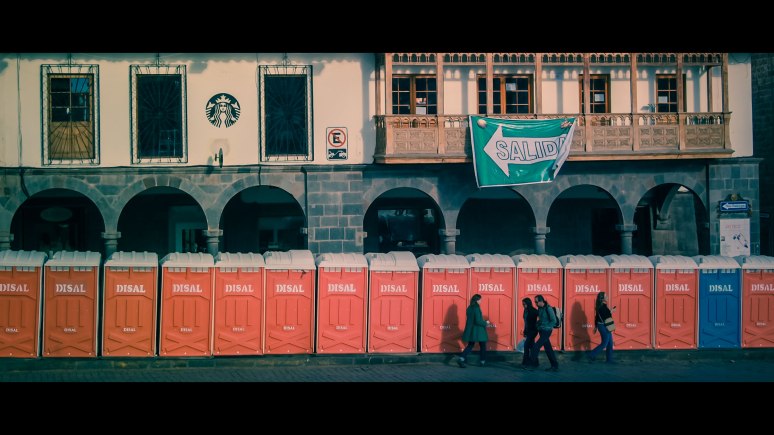 A Line of Portable Toilets

These temporary toilets aligned neatly along the street of Cusco (Peru), supposedly ready for a massive festival or street parade. However, they were carelessly misoriented such that the front door of each cubicle was stacked against the backside of the next cubicle! Not sure if I describe the situation well enough, but you are actually looking at the sides of the toilets!

This is my response to Weekly Photo Challenge: Door (or the lack of one). 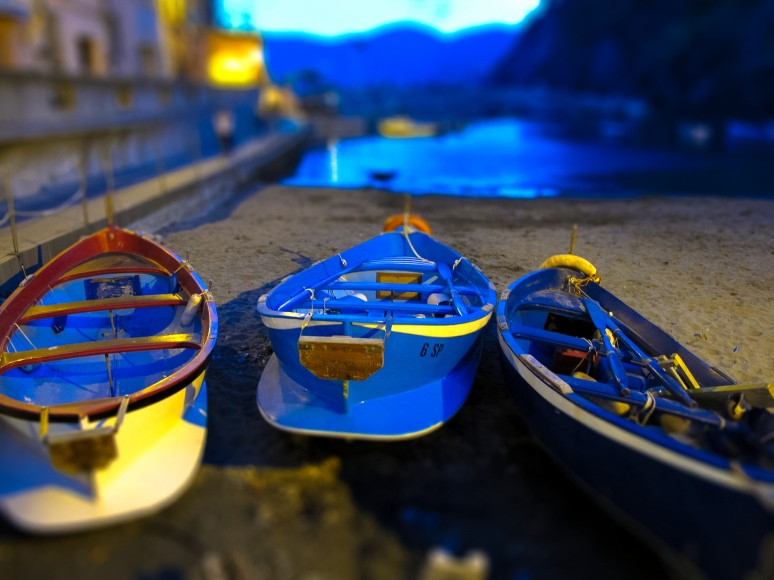 The picturesque coastal village of Vernazza (Cinque Terre, Italy) is quiet during off-season, especially in the evening. I attempted to create a miniature and toy-like effect for these fishing boats.